Deb Wilkes and her partner Chris Townsend are the inspiration behind Southampton’s Dead Good Days, a new festival taking place from 23rd October to 10th November. It is a series of family-friendly events, workshops and talks that will entertain, inform, intrigue, and equip us all to better deal with death, dying and loss.

The Southampton Collective are excited to be supporting the main day, which is on 10th November at St Denys church SO17 2ND between 11am and 5.30pm, and is open to all. Entry is by a £3 donation for adults. It will include talks and workshops, poetry, exhibitions, advice on will writing and power of attorney, willow weaving, coffin painting, decorating sugar skulls, Southampton Ukulele Jam, food from The Hampshire Table and much more. In its second incarnation, Dead Good Days is for anyone who might, one day die, and The Southampton Collective is keen to support these conversations about death, dying and loss, especially in the creative and caring approach that has emerged with the Dead Good Days team. 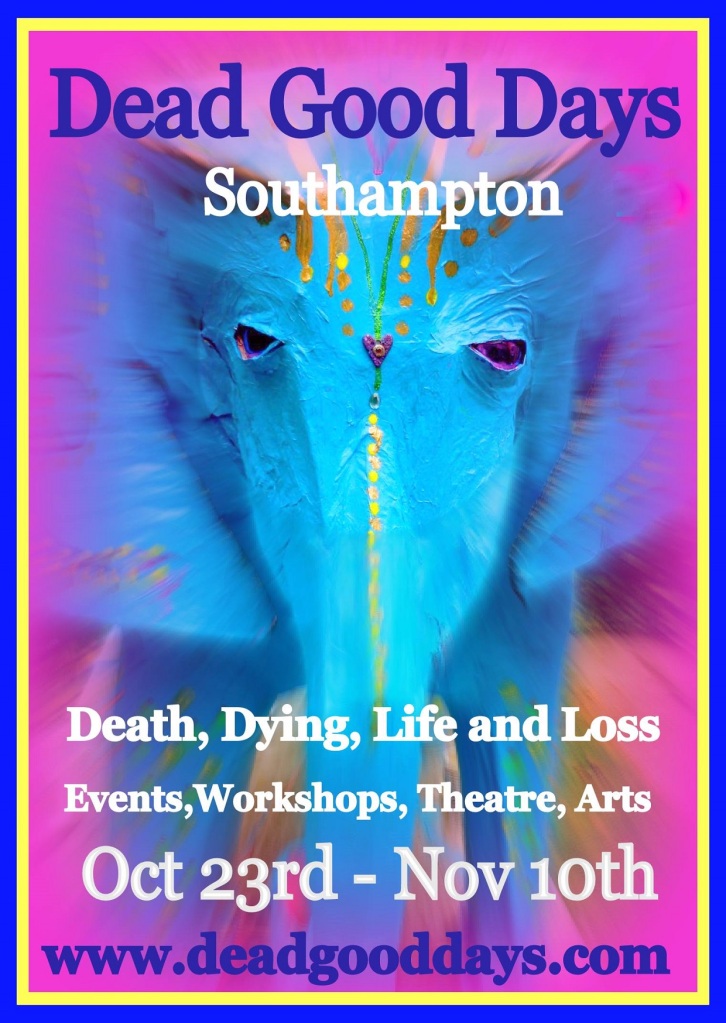 In her TEDx Southampton 2018 talk Deb talked openly and intimately about death and dying. We asked her for a few more insights into this important issue:

Your TEDx talk was an emotional experience for the audience, and clearly for you too. How have people responded to you talking so openly about death and dying?

I guess it was a self selected group – my friends or people who thought they would find the topic of interest. But – all positive. If there are a few real stories told, one will often resonate.

Someone fom Macmilllan in London phoned me today, to say he shared it with his team – his comment was that often what they do is ‘top down’ and corporate, so it was good to see the personal behind the policies they are making.

Why is it important to talk about death and dying?

It’s a well used phrase but a true one – ‘it will happen to every one’ – that means we will all face our own death, and that of someone we are close to. If we do talk more openly, it means we can share stories and advice; be more empowered to make decisions and challenge those ‘in authority’; allow people to talk about their fears and concerns; say our ‘goodbyes’ if we are lucky enought to have the time; grieve more openly; and ultimately make bereavement a slightly less painful process.

How has your work as an end of life care practitioner influenced you?

Because I knew what I did, it meant I was able to make sure my own Dad’s dying and death was managed well and he was at home, where he wanted to be. It meant that the family were prepared and we knew we didn’t have to rush afterwards.

I also know how the medical profession make their decisions; how we have ‘progressed’ so much we are prolonging life at often a big cost to all; how little support there can be and how unseamless services often are. We need to take dying back into our communities and have it more in our control.

I have been with many families who haven’t acknowledged an impending death, for fear of…I’m not sure what …maybe getting even worse? But 99% of the time, if it is brought up, however difficult it is at the time, it is a relief. Because it usually can’t get any worse.

What music would you want played at your funeral?

Tricky! I do think it’s important for someone to write down just one thing they may like – to give their family a starting point.

I’d always said I would have Cat Stevens’ ‘Morning Has Broken‘ because I had his album and it’s nostalgically placed in my early teeange years; because I love his voice; because I think it’s good to have some reflection at a service (my other one can be the boisterous ‘Gogol Bordello‘ for dancing in the aisles); because it’s a great message to welcome in every day and because my sons would roll their eyes and groan – I used to sing it (fairly badly and loudly) into their bedrooms when they wouldn’t get up in the mornings!

What is your favourite depiction of Death in film or literature?

A one-man play (can’t remember the name) which had an old thespian (a puppet, made out of bin liners and a shopping trolley) and his estranged son, who came to visit him when he was dying. The puppet does a ‘last speech’ hurls himself across the stage and the son is distraught.

The old man then picked himself up and said ‘that was no good’ and he went on to make several more ‘last speeches’ – it was poignant and funny and has stayed in my mind!

What’s the key to feeling comfortable with dealing with death and dying ourselves?

The key to feeling comfortable with anything is talking about it – it takes away the fear and normalises the subject. And come along to Dead Good Days to find out more!